The Pitra Yadnya Rites for Ancestors 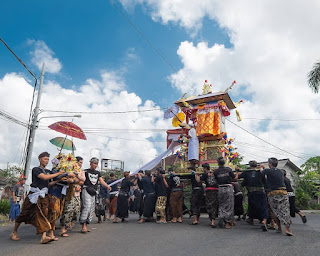 Life ,death ,rebirth ,This cyclical conception of existence lies at the very heart of Balinese Hinduism .During each life on earth the eternal soul occupies a temporary vessel – the physical body – which at death must be returned  to the pancamahabhuta , the five elemental substances : solid ,liquid , radiance ,energy ,and ether . Only then can be the soul be released and reincarnated . Of all Balinese rituals , the cremation ( pengabenan,palebon ) is the most complex ,lasting for many days  and culminating with the spectacular burning of not only the corpse but of vast quantities of valuable ritual object especially created for the occasion.

Calling the soul
Due to the huge amount of time and expense involved,acreamation is usually postponed for months or even years .In the meantime the body of the deceased is temporarily buried . Family members first wash and groom the corpse ,then wrap it in cloths and mats .A raw egg is rolled across it and smashed  to the ground , removing all impurities . The body is then transported to the cemetery on a simple bier and buried  without a casket.
Once a favorable day has been set ,an army of ritual specialist ,artists ,priest ,family members ,friend ,and neighbors of all ages and sexes is mobilized ,calling upon an encyclopedia of communal knowledge in the creation of offering of every imaginable shape ,color ,and ingredient and the performance of a series of elaborate rites.
Before cremation a “ soul calling “ ritual must be held at the grave .Offering are made, and as the corpse cannot be returned to the house once it has  been buried  , the soul is taken home in a sangah urip effigy containing soil from the grape. Outside the house a paper and coconut shell lamp – a damar kurung – is hung to guide the soul home.
The washing of the corpse is symbolically repeated on an edegan , a small board  with a human figure drawn on it .The day before the cremation , a priest prays for favorable treatment of the soul in the afterlife. Various types of holy water are made and offering are purified . The angenan , an eggshell lamp mounted on a decorated coconut ,serves as a memorial.

The procession
On the day of the cremation ,once the sub has passed the zenith ,loud gong music is played and a lively procession starts the journey  to the cemetery . Dozens of offerings and ritual objects lead the way , and the body is carried  in  a colorful tower ( wadah , bade )  fashioned of wood ,bamboo ,and  paper  ,shouldered by scores of shouting men . Platforms at the base  represent  the earth  ,sometimes  resting on the cosmic turtle  and serpents  of the underworld .On the back of the tower may be a winged and fanged face of the son of the earth ,and higher up a goose symbolizing purity.
Above these platforms is an open space for the body , and crowning the tower is an odd number of roofs representing the heavens . The caste and clan of the deceased determine the number  : 11 for royalty , less for persons of humble birth . Attached to the front of the tower is a long  , white cloth ( lantaran ) held by family members to represent their ties to the deceased . The tower is rotated at each crossroad to disorient and prevent  the soul from returning to disturb the living.

Release through fire and water
Arriving at the cemetery  , the body is taken down and a pair of birds set free ,symbolic of the soul’s release . On a bamboo platform under a high roof stands a wooden sarcophagus ( called a patulangan or palinggih ) decorated  with cloth and paper  , sometimes carried  in procession ahead  of the tower  . The sarcophagus is generally in the shape of a mythical animal such as a bull or winged lion.
The sarcophagus is opened and the body or newly exhumed remains ( sometimes simple an effigy ) are carried around  it and placed inside . The shroud is opened ; jars of holy water are poured over  the body  and shattered  . Cloths , letters of introduction the the gods , and effigies are piled inside ,and the sarcophagus is closed . Offerings are placed  below to start the fire ,and the sarcophagus and corpse are consumed by flames .The tower is burned separately.
Death brings with it the opportunity to fulfill all duties toward the deceased ,and there is no public display of mourning if the deceased has lived a long and full life . Weeping near a corpse disturb the soul ,making it unwilling to leave . Grief is expressed in private , however  ,especially if a young person has died prematurely as the result of serious illness or a tragic accident.

Purification and deification
When the corpse has finally been reduced to ashes ,the flames are doused and the family hunts for bone fragments ,forming them into a small human shape . The bones  are pulverized  and placed in an effigy made from coconut  , which is taken on a bier to the sea or river  and cast into the water . Three days later  another ceremony removes the ritual pollution brought by death upon the living.
Twelve days after the cremation , the soul of the deceased is purified in a ngrorasin rite ,often accompanied by rituals ( mukur , nyekah , ngasti , maligia ) designed to deity the ancestor  A sekah effigy is made for the soul and placed in a high pavilion . In the evening , family members pray  and offer  their respect . Early the next morning , the image is broken  and burned  , and the ashes  placed in a decorated coconut . A tower ( bukur ,Madhya ) then transports them to the sea for disposal.
Finally , in the nyegara –gunung ceremony .the family expresses thanks to the gods of the oceans and the mountains . Offering are brought to important sea and mountain temples often including Besakih , after which the deified soul is enshrined in a clan of family temples as a protective ancestral