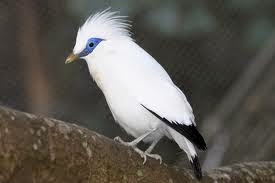 As an endemic species of Bali symbolizing purity and chastity, it is also called the Bali mynah, the Bali starling, Rothschild’s mynah and the Rothschild starling. Scientifically named Leucopsar rothschildi Stresemann, the Balinese call it curik bali or jalak bali. The bird was first discovered in 1911 by German ornithologist Erwin Stresemann in the northwestern part of Bali. As monitored by a team of the Association of Bali Mynah Conservationist (APCB) and Ecosystem Control officers at Brumbun Bay Resort, West Bali National Park (TNBB), the birds like to flock together with sri gunting (ashy drongo), because these song birds are more aggressive toward eagles, which are the natural enemies of curik bali. Curik bali’s presence in the forest attracts attention, with its white feathers making it easy to spot. To avoid detection by eagles, they often perch on branches of pilang (Acacia trees), which have white bark that can camouflage them. For the protection of curik bali in nature, in 2004 the APCB, whose members comprise executives of zoos in Indonesia, the Forestry Ministry, bird researchers from the Indonesian Institute of Sciences (LIPI) and members of the Indonesian Wildlife Conservation Forum (Foksi), conducted a survey in the TNBB to ascertain the causes of world agencies’ failure in curik bali conservation. It turned out that the failure was due to illegal logging and curik bali poaching, while the park itself was under threat and unable to optimally support the threatened species. “Since 2004, we’ve been trying to encourage the captive breeding of this endangered species by involving local people in conservation activities, which is backed by a Forestry Ministry decree permitting the public, particularly the community around the TNBB, to keep and breed curik bali,” said the head of the APCB, Tony Sumampau, when monitoring the birds in the park in Gilimanuk, Bali. In 2007, captive breeding activities in the TNBB area spread. The price of a curik bali was initially about Rp 15 million (US$1,310), which later decreased to Rp 6 million. The birds bred under such conditions are not considered ideal due to having been inbred. For better genetic quality, the APCB has sought new stock and collected 96 bird samples tested by LIPI specialists. LIPI curik bali researcher Noerdjito said the birds could be genetically improved in captive breeding. Fledglings should be selected for cross breeding to obtain the best offspring. However, the birds are generally released without this happening. “I’ve repeatedly notified the TNBB of the need to select the young curik bali, but the message may not have been properly received due to frequent post transfers, while the birds kept in several zoos in Indonesia should also be cross-bred for their best broods,” explained Noerdjito. Besides the Ainun Yaqqin Foundation being located some 4 kilometers from the TNBB, 17 curik bali breeders also live in Sumber Kalmpok village, Buleleng regency. They belong to the Curik Bali Conservationists Group (KPCB) of Manuk Jegeg. Based on a consensus between the breeders and the APCB, 10 percent of the birds bred are released. However, the breeders are disappointed by the difficulty in securing a license to sell curik bali. “We breed curik bali the same way we raise our cattle. We appeal for distribution license facilitation to enable us to sell the birds and buy insects and fruit for the young broods. We applied for a license from the Natural Resources Conservation Agency [BKSDA] a year ago but have had no response,” said Gusti, a breeder from Sumber Klampok.
Posted by Gede Bali Driver at 3:34 PM No comments:

“Bali with an expert” 5 of 5 starsReviewed April 12, 2014 NEW We recently arrived in the beautiful Bali via cruise ship. Our time was limited and we didn't exactly know what to to or see whilst there. Gede was wonderful. He was waiting for us at the dock with a cold bottle of water and a friendly smile. We did a relatively short tour consisting of a silver factory and the monkey forrest in Ubud. At Gede's suggestion we also stopped for a beautiful lunch along the way. We couldn't have been in better hands and we will definitely contact Gede again the next time we visit Bali. If you want your Bali visit informative and memorable we highly recommend you contact Gede ahead of time and let him know what/where you would like to visit. We cannot recomment him highly enough.
Posted by Gede Bali Driver at 5:50 AM 1 comment:

“Great Tour, No Communication Barrier.” 5 of 5 starsReviewed April 10, 2014 NEW Me and my girlfriend got to know Gede from our friends who has engaged to Gede tour service last year. We contact Gede 7 months before our trip, and Gede was so well promptly reply to our email, He suggested places we shall visit, but because we were having a short trip so i have give up to some place has recommended by Gede, He sounds no problem to make any request to suits our needs. Booked Gede with an Airport pick up but our flight was delayed on arrival about 1 hour due to a bad weather condition take off from Kuala Lumpur, Gede has waiting us at the departure hall with a piece of cardboard, big enough of Text to spot my own name although there was a large crowds of tour operator same as Gede holding their piece of paper to welcome their traveller. We booked 2 days of trip, And Gede was a well speak english, exactly no problem on communication, along the trip Gede has bring to some topic telling us the culture, current affair and economy and also interesting place in Bali. We have mention to Gede about our plan to have wedding in Bali, he is so kind that to suggest us to contact a wedding planner, and i have tell Gede our next trip on wedding to bali hope he would be able to be a guide driving our friends and family tour around Bali. Visited April 2014
Posted by Gede Bali Driver at 12:14 AM No comments: