A Vilage Haven for the Art. 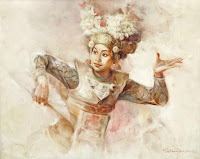 Ubud was once known as a “quite” haven for the art. Set amidst emerald green rice paddies and steep ravines in the stunning central Balinese foothills some 25km (15.5 miles ) north of Denpasar, the village  was originally an important source of medicinal herbs and plants.”Ubud “ in factderies from the Balinese word fro medicine,ubad.
However ,since the 1990s massive changes, including an influx  of foreign investors .expats looking for peace and yoga ,and the inevitable traffic jams that large buses bring , have made Ubud a tourist mecca ,albeit with a much  larger concentration of artists than perhaps anywhere else in the world.
It was  here that foreign artists such as Germany painter  Walter Spies settled during the 1920s and ‘30s, transforming the village into a flourishing center for the art .Artist from all parts of Bali were invited by the local prince Cokorda Raka Gede Sukawati,to stay here  and Ubud’s palaces and temple are adorned by the work of Bali’s master artisans as a result.
According to an eight-century legend a Javanese priest named Rsi Markendya came to Bali from Java  and meditated in campuhan ( Sangam in Sanskirt ) at the confluence of two streams ,an auspicious site for hindus. He founded Pura Gunung Lebah here on a narrow platform above the valley floor , where pilgrims seeking peace came to be healed from their worldly cares .