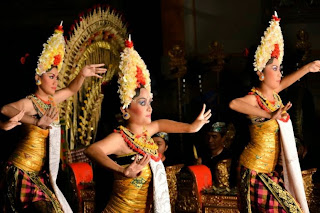 Ubud is a town on the Indonesian island of Bali in Ubud District, located amongst rice paddies and steep ravines in the central foothills of the Gianyar regency. One of Bali's major arts and culture centres, it has developed a large tourism industry. Ubud has a population of about 30,000 people. Recently, it has become difficult to distinguish the town itself from the villages that surround it. The area surrounding the town is made up of small farms, rice paddies, and dense forest. The main street is Jalan Raya Ubud (Jalan Raya means main road), which runs east-west through the center of town. Two long roads, Jalan Monkey Forest and Jalan Hanoman, extend south from Jalan Raya Ubud. Puri Saren Agung is a large palace located at the intersection of Monkey Forest and Raya Ubud roads. The home of Tjokorda Gede Agung Sukawati (1910–1978), the last "king" of Ubud, it is now occupied by his descendants and dance performances are held in its courtyard. It was also one of Ubud's first hotels, dating back to the 1930s. The Ubud Monkey Forest is a sacred nature reserve located near the southern end of Jalan Monkey Forest. It houses a temple and approximately 340 Crab-eating Macaque (Macaca fascicularis) monkeys. Ubud tourism focuses on culture, yoga and nature. In contrast to the main tourist area in southern Bali, the Ubud area has forests, rivers, cooler temperatures and less congestion although traffic has increased dramatically in the 21st century. A number of smaller "boutique"-style hotels are located in and around Ubud
Posted by Gede Bali Driver at 3:33 PM 1 comment: 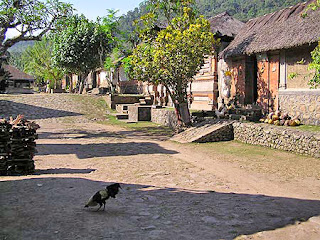 Tenganan Pegringsingan is a village in the regency of Karangasem in Bali, Indonesia. Before the 1970s was known by anthropologists to be one of the most secluded societies of the archipelago. Rapid changes have occurred in the village since the 70's, such as the development of local communications by the central government, the opening up to tourism, the breaking of the endogamic rules. [1] Tourists are attracted to Tenganan by its unique Bali Aga culture that still holds to the original traditions, ceremonies and rules of ancient Balinese, and its unique village layout and architecture. It is known for its Gamelan selunding music and geringsing double ikat textiles. Village layout Houses in Tenganan Pegringsingan village are built on either side of the north to the south concourse with their doors opening on to it. The entrances of the houses are narrow, only allowing one person to enter or leave at any one time. One enters the village through the gate on the southern end. On either side of the entrance are two small temples. Across from these is the long balé agung, where the administrative decisions for the village are made. Next to that is the drum tower (kul-kul). The kul-kul is beaten 21 times each morning to start the day.Up the center are a series of communal pavilions (balé banjar) for formal and informal meetings, ceremonial gatherings.[3] At the northern end is the village temple Pura Puseh, the temple of origin. The People of Tenganan PegringsinganThe people of Tenganan Pegringsingan are called Bali Aga—the original Balinese. They descend from the pre-Majapahit kingdom of Pegeng. There are strict rules as to who is allowed to live in the village. Only those born in the village can stay in the village and become full members of the community. There are rules regarding marriage and anyone who marries outside of the village has to leave. A strict protocol regarding marriages among the kin groups have steered the Tengananese through the genetic perils of intermarriage although with increasing contact with the outside world these rules have relaxed somewhat. Rites and Rituals Many of the life-cycle rituals of the Tengananes are similar to those of the Balinese in general, but have subtle differences. Some ceremonies are unique. One of the distinguishing features is the use of geringsing. By virtue of their magical qualities geringsing are not only capable of keeping impurities and danger out of the village, but also shield and protect humans from baleful influences during rites of passage as they transition from one phase of life to the next. The Tengananese receive their first geringsing at the hair cutting ritual. His hair is cut and placed in a basket which is placed on a folded geringsing on the balé tengah, on which the Tegananese both enters and leaves the world. In the ceremony that admits a boy or girl to the youth association of the village, they are carried in a geringsing
Posted by Gede Bali Driver at 4:37 PM No comments: