History in a Balinese Looking Glass 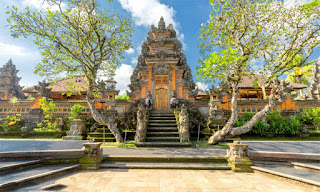 Most of what is known about Bali’s traditional kingdoms comes from the Balinese themselves. Scores of masked dance dramas, family chronicles , and temple rituals focus on great figures and events of the past. In such accounts , the broad outline of Bali’s history from the 12th to be 18th centuries is an epic tale of the coming of great men to power . These were the royal and priestly founders of glorious dynasties some proud – who together with their retainers and family members determined he fate of Bali’s kingdoms , as well as shaping the situation and status of the island’s present – day inhabitants.
It is possible to see the Balinese as both indifferent to history and yet utterly obsessed by it. Indifferent because they are not very interested in the “ what happened and why “ of professional historians,while  at the same time they are obsessed by stories concerning their own illustrious ancestors.
Balinese “history” is in fact a set of stories that explain how their  extended families came to be where they are. Such stories may explain ,for example , how certain ancestors moved from an ancient court center to a remote village ,or how they were originally of aristocratic stock although their descendants no longer possess princely titles .In short , they provide evidence of a continuing connection between the world of the ancestors and present-day Bali.
Major events are thus invariably seen in terms of the actions of great men ( and accasionally women ) ,yet  to view them as mere individuals is deceptive .They are divine ancestors , and as such their actions embody the fate of entire groups .Above all ,they are responsible for having created the society found on Bali Bali today.
Each family possess its own genealogy that somehow fits into the overall picture . Some focus on kings , their followers or priests as key ancestors . Other see the family history in term of village leaders , blacksmiths ( power, as makers of weapons and tools ) or villagers  who resisted and escape  the advance of new rulers.
The fact that such stories sometimes agree  with one another should not necessarily be taken as proof that this is what really happened. There are many gaps loose  ends and inconsistencies , often pointing to the fact that generations of priests , princes and scribes have recast these tales about the past to serve their own ends .The sagas must be retold ,nevertheless ,in order to know what is open to dispute.

Posted by Gede Bali Driver at 1:53 AM