Ubud is in many ways Bali's cultural heart,around Ubud, there are the surrounding by  Ancient holy sites include the intricately carved Goa Gajah (“Elephant Cave”) Yeh Pulr, Samuan Tiga Temple 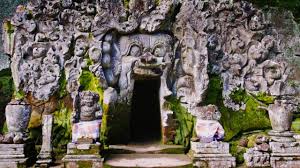 Goa gajah or Elephant cave is located in the southwest of Bedulu village,next to Yeh Pulu Relief.6 km from Ubud.Known only to local villagers and the bats during centuries of neglect,the cave was revealed to the public in 1923.The bathing place was discovered and restored only in 1954 during archeological investigations done by Mr.Krijsman.It had become filled in and a templebuilt upon it , which had to be moved to its present site. The spring and pond there have given the temple its name-- Pura Taman.

Carved into the stone above the cave entrance is a massive face with bugling eyes and high arched eyebrows.The eyes glance towards the west ot the left as you face the cave.The large ear ornaments do not necessarily indicate a female face,for male royalty also wore such ornaments.This figure represnets Boma (sometimes also called Kala or Sanskrit : Kittimukha ), and it is probably the earliest representation of this figure in bali.According to Balinese texts ( lontar ),Boma is the son of the god Wishnu an dthe goddess Basundari or ibu ( Mother ) pertiwi .Boma may be likened to the child of water and earth, for wisnu is the gid of waters and Parwati is the goddess of the soil or mother earth.

Yeh Pulu Relief
Relief Yeh Pulu was discovered by the army-commander of the kingdom of Ubud for the first time in 1925 .it is one of the classic monumenets from the  14 AD century.The research about this monument was published by DR.W.F. Sutterheim,the head of the Dutch Archeologiacl Department in 1929.

The name of Yeh Pulu is derived from an image of a bowl where the water comes out in one part of the relief .Yeh means water and Pulu means large a earthenware bowl used for water. The relief is carved 25 meters large by 2 meters along a steeply sloped riverbank.The daily activity of people during that time is perpetuated through this beautiful relief .Besides the relief itself,there are several niches that are used by the King of Bedahulu for meditation.

Pura Samuan Tiga
Pura samuna Tiga ( Samuan Tiga Temples ) was a meeting place for the religious leaders in the era of the Gunapriyadharmapatni and Udaya Kingdoms ,about 1001 AD. the concept of Desa Pekraman ( the traditional Balinese Village system ) was initiated during this time . The agreement of social relegious system development in Bali was created by one of the central figures in Bali-- Mpu Kuturan.He was the one of the famous knights and the religious leader of the kingdom.

Every sect had their own prime goddess and considered that their gods was higher than the others.This fanatic faith created conflict that had the potential of blowing-up at anytime.King Udayana tried to reduce the conflict by inviting the religious leaders from both Java and Bali,who then held a summit conference of all the religious leaders which took place at Pura Penataran Temple.To commemorate that summit meeting,the temples was then named Samuan Tiga .