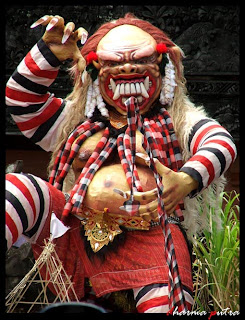 Ogoh-ogoh are statues built for the Ngrupuk parade, which takes place on the eve of Nyepi day in Bali, Indonesia. Ogoh-ogoh normally have form of mythological beings, mostly demons. As with many creative endeavours based on Balinese Hinduism, the creation of Ogoh-ogoh represents spiritual aims inspired by Hindu philosophy.[1][2] The main purpose of the making of Ogoh-ogoh is the purification of the natural environment of any spiritual pollutants emitted from the activities of living beings (especially humans). The forms of Ogoh-ogoh represent the Bhuta-Kala (Bhuta: eternal energy, Kala: eternal time), according to Hindu teachings. The imperceptible potentials of nature cannot be thoroughly explored by anyone. Philosophically, civilized men are required to manage the natural resources without damaging the environment itself. Aside from being the symbol of Bhuta-Kala, Ogoh-ogoh is considered a symbol of modes of nature that form the malicious characters of living beings. Ogoh-ogoh are usually made by the group of artists found in villages around Bali. After being paraded on a convoy around the town, finally it is burnt to ashes in a cemetery as a symbol of self-purification. An Ogoh-ogoh is normally standing on a pad built of timber planks and bamboos. The pad is designed to sustain the Ogoh-ogoh while it is being lifted and carried around the village or the town square. There are normally eight or more men carrying the Ogoh-ogoh on their shoulders. This procession is accompanied by orchestral music performed by the youth. The use of flares is also a main part of the parade. During the procession, the Ogoh-ogoh is rotated counter-clockwise three times. This act is done at every T-junction and crossroad of the village. Rotating the effigies during the cremational parade and the eve of Nyepi represents the contact of the bodies with the spirits. It is intended to bewilder the evil spirits so that they go away and cease harming human beings. The Ogoh-ogoh is a very recent addition to the Nyepi ceromonies, first appearing in Denpasar in the early 1980s. At that time, they were carefully monitored for any criticism of the Suharto regime.
Posted by Gede Bali Driver at 7:02 PM 1 comment:

We recommend this guy warmly

“We recommend this guy warmly”

Among numerous Bali drivers we had the pleasure of using, Gede would be in the top.
He is nice looking, well groomed, polite and his knowledge of English allows you to discuss local topics with him for a whole day.
His van is very comfortable and nice looking, his driving responsible and his prices quite reasonable.
Once enjoying his level of service, you will be booking him repeatedly later - rest assured.
Gede is our default driver when we stay in Bali.

I know Gede and would recommend him to my friends as an excellent guide and driver. When I was in Bali he took us to places that were very special where not many tourists go. He knows Bali because it is home and he is steeped in its traditions and culture. He cares deeply about his family and community. If you want to know Bali in a deeper way than the hype and bright lights, he is your man. I am sure he can find you the fun spots you want too.

Gede spent Christmas in our home many years ago and we gave him a tee shirt that said, "G'day from Australia". He is a lovely person, who is bright, generous and caring, has integrity and cares about his clients and his work. Our family has kept in touch over the years and enjoyed watching his lovely sons grow. I hope you will use him for your holiday in Bali.

Posted by Gede Bali Driver at 3:50 PM No comments: