Melukat is derived from Sulukat. “Su” means good, and “lukat” means purification,“Melukat” means to cleanse or to purify. Melukat is a unique religious ritual and a holy sacrifice dedicated by a human being to cleanse and purify the human body and soul from havoc, bad luck, and illness. The ritual usually holds on a good day in a Balinese Calendar. Melukat Ritual is also known as a “spiritual maintenance”. It is done by taking a bath in a natural water source like rivers, waterfalls or the sea with a blessing of Ida Sang Hyang Widhi Wasa (God Almighty) and with prayer by a priest.

The ceremony is carried out on a good day and it is a tradition, which have been done by Hindus in Bali generation to generation until now.Purifying spiritually means a process to remove bad influences or “klesa” in human.
Klesa means dirty. There are five klesa, they are “Awidya”, soul darkness because they perceive themselves as smart, rich, young, strong, noble, beautiful, or handsome. “Asmita” is egoist and the body only stress on releasing desire. “Dwesa” is hatred and revenge. “Abhiniwesa” is fear.

One of the most popular sites where Balinese people as well as visitors go to partake in melukat is Tirta Empul Temple in Tampaksiring. A large rectangular pool is fed by holy spring water that flows from of a series of 12 stone fountains. Worshippers first make an offering at the temple, and then climb into the main pool to bathe and pray. Many people collect the holy water in bottles to take home and use in their own family temple.

Posted by Gede Bali Driver at 5:51 PM No comments: 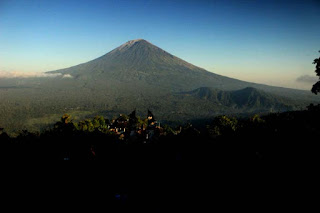 I've read a few mainstream media items coming out of Australia this morning that are SO misleading, untrue and stand to create fear that is unwarranted. (As do some social media posts)

° The ONLY people that need fear of Agung are those WITHIN the 4klm exclusion zone. THAT'S IT. Everyone else is 💯% fine, so just sit back, enjoy mother nature.

°The warning level remains at 3 of a possible 4... IF something was afoot that required the level to be raised it would be... THERE IS NOTHING HAPPENING TO WARRANT A RAISE. Therefore there is NOTHING to worry about. I trust the Government in its assessments totally.

° Since Agung awoke in September 2017, some 580+ days have past. The airport has been affected for LESS than 4 of those days (0.68%). That means 99.3% of the days have been FACTUALLY worry free. Millions of people have come, enjoyed Bali's wonders and returned home safely.

° Ash falls.... I'm sure everyone has seen photos of historical eruption events around the world, houses, streets, cars, people covered by many inches or even feet in ash. This hasn't happened with Agung.....NOT once since September 2017 has ANY Agung eruption created any fallout that would be deemed health or life threatening OUTSIDE the exclusion zone.
Tens of thousands of dollars have been spent by people buying masks and NEVER used.

° The ONLY people affected FACTUALLY by Agung are those that live or make their living WITHIN the 4klm zone. The impact on their lives is immense. EVERYONE else should get on with their holidays as Agung has mathematically less than 1% chance of affecting anyone else. Don't dramatise things that aren't reality. Enjoy life.

° Predictions..... Yes, every now and then I will say ' Get your camera's ready. This is when, from what I read into available data, there is good probability of eruption. Generally I give a +/- 48 hour window and hit the mark. I have been out as far as 3 extra days which happened last month. Nobody can predict with 💯 percent certainty. Not possible. Short term and more so long term predictions are at the mercy of mother nature who continually changes her mind and walks off in a different direction. I do my best to inform you all of possibilities... don't shoot the messenger 😉

° Summary....
Agung is a volcano.
Volcanoes erupt.
Eruptions are events of awe.
Be EXCITED about the prospect of being lucky enough to witness what most of humanity will never see.
Agung is not to be feared. It is to be respected and those that venture within 4klms knowingly may soon feel Agungs wrath. I hope the government outlaws entering the zone soon. I pray deaths are not the catalyst for such measures.

EVERYONE else, get away from focusing on what Agung is doing (or not doing) and start living a stress-free holiday .... FREE YOUR MIND OF THE 'WHAT IF'S'.

Posted by Gede Bali Driver at 5:53 AM No comments:

We have always heard Bali being one of the most beautiful places to visit and it is often in ones checklist. Right from temples to beaches to water sports the place has it all. Bali is nature loving place and If you and your friend are big city people consider visiting Ubud. Ubud’s Tegallalang Rice Terraces offers some beautiful terraced landscape which has become famous for its scenic stopover. Places like Goa Gajah 'Elephant Cave', the Puri Saren Royal Palace, the Campuhan Ridge walk are all the tourist location that would give you goose bumps with its beauty. When it comes to accommodation the Ubud Raya Resort offers you an elegant yet a modern style. The resort gives you a breath-taking natural landscape and it's right near the Ubud Market sorted for all you shopaholic out here. The place has its very own private villa with a private pool just for you ladies. With the stunning amenities Bali offers hurry up and plan a trip to this beautiful resort in Bali.

Posted by Gede Bali Driver at 6:38 PM No comments:

Escape the bustling and busy life of Bali nd take a trip through the calm countryside as you ponder the rich verdant rice terrace of Jatiluwih.Journey through the thick tropical forest of Mount Batukaru and visit the ancient Batukaru Temple,and magnificent orange skies as the sun sets behind The Marine Temple of Tanah Lot, built on a rocky outcrop, and surrounded by the shimmering ocean. on this full- day tour.
Highlight 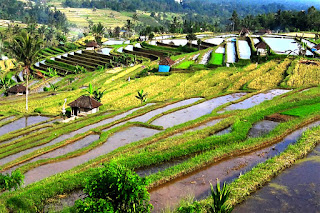 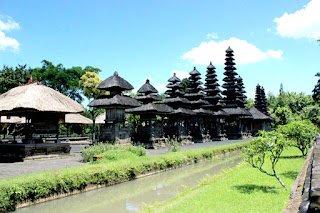 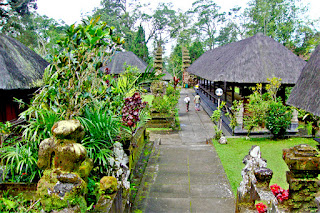 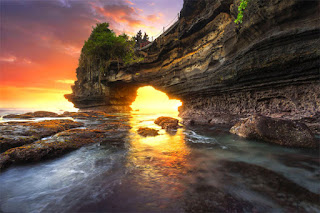 Posted by Gede Bali Driver at 5:41 AM No comments: