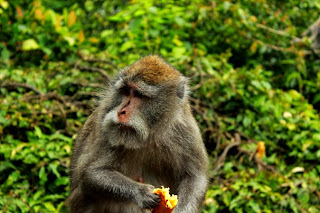 The Sacred Monkey Forest Sanctuary is a Balinese Hindu site at the bottom of Monkey Forest Road and populated by cheeky long-tailed macaques. It's a popular site with visitors to Ubud who come to see the monkeys and the temples within the sanctuary. There are hundreds of monkeys living in and around the monkey forest. You can purchase food for them at the entrance gate but be warned that the monkeys are aggresive opportunists - particularly in their pursuit of food. They will think nothing of climbing on you or raking through your bag in search of something edible. There are 3 temples within the forest, Pura Dalem (death temple), the Holy Bathing Temple and Pura Prajapati (funerary or cremation temple). All 3 of these temples are sacred, as is the forest and the monkeys, who are believed to protect the area from evil spirits.
Posted by Gede Bali Driver at 3:38 PM No comments:

“Great tour guide ” 5 of 5 starsReviewed August 18, 2014 NEW Gede is not just a driver, but a great tour guide. My experience with him was wonderful and very informational. He not only takes you on day trips throughout Bali, but teaches you about the history of the Balinese people. Gede is very trustworthy, dependable, humble, and very pleasant to be around. He speaks English very well and will recommend different places for you to visit. The itinerary depends on the places you want to visit and he will ensure you get adequate time to do everything on the trip. I had Gede for a two day trip, which was extraordinary! If you are looking for someone to show you Bali on your own terms, look no further because Gede is your tour guide!
Posted by Gede Bali Driver at 4:00 PM No comments:

“Gede enriched our Balinese experience” 5 of 5 starsReviewed August 19, 2014 NEW We recently spent two weeks in Bali and again used Gede Suyasa as our driver and guide. Before the trip, Gede helped us develop our itinerary and choose hotels/resorts to stay. Gede is absolutely prompt, dependable, honest, patient and helpful. He offers good advice, but also listens to what we want to do, what interests us, and then helped us achieve those things. For example, we like real Indonesian food rather than the watered down variety you get in most tourist places, so Gede took us to, or recommended warungs or restaurants we could find what we wanted. We stayed in three different places, and our trips between were fascinating tours through towns, sites of interest, and countryside, where possible on back roads that could avoid traffic. Where we couldn't avoid traffic, we still had an insight into Balinese life and could talk about all kinds of issues. Our one-day tours were enjoyable. We really like Gede and always recommend him to our friends.
Posted by Gede Bali Driver at 3:57 PM No comments: 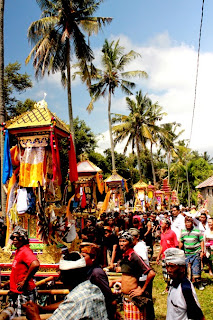 Within Hinduism, cremation (utilizing fire to reduce a dead body to ashes) is a process that is believed to set an individual's soul free from the body and allow that soul to take part in the reincarnation process. Historically, Balinese Hindu cremation ceremonies have been conducted in such as way as to provide a deceased individual with an elaborate tribute and send off. Many Balinese families have traditionally not been able to afford to cremate the body of a deceased relative immediately after that person's death (today, it is not uncommon for a Balinese Hindu cremation ceremony to cost a family the equivalent of a years income). Therefore, many Balinese families opt to bury the body of their relative (in a cemetery like the one found within the Sacred Monkey Forest of Padangtegal), work for several years in order to save up enough money for a cremation ceremony, and have the body of their relative exhumed just prior to his or her cremation. Historically, most Balinese Hindu cemetery and cremation sites were located in remote areas (areas that were not within or immediately next to a village). An exception to this rule is cemetery sites utilized by upper caste Balinese (which have traditionally been located within family compounds). Today, although bodies are still buried within the Sacred Monkey Forest's cemetery, bodies are not cremated within the Sacred Monkey Forest. Instead, bodies are exhumed and prepared for cremation. Cremation preparation has traditionally involved the washing and wrapping a body in cloth (after being buried, most bodies have decomposed to the point that only bones remain). After a body is prepared for cremation, it is brought to another location where it is placed upon a cremation pyre. On the day of the cremation ceremony, village members carry the cremation pyre (and other pyres containing belongings of the deceased person) to the cremation site. However, cremation processions do not go directly to the cremation site and the cremation pyre, as the procession moves along , is turned around in circles. This is to insure that once a soul is released from a person's body, that soul will not be able to find its way back to the village. After a body is cremated, ashes and any remaining bones (after being washed) are placed in urns and distributed to family members. Some of the ashes and bones, as an aspect of Ancestor Worship, are placed in family temples (which are located in family compounds). Remaining ashes and bones are both caste into the sea and placed at several major Balinese Hindu temple sites.
Posted by Gede Bali Driver at 4:19 PM No comments: