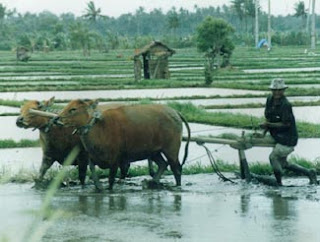 Balinese Hindu has a ceremony called Tumpek Uye or Tumpek Kandang.The ceremony is intended to give thanks to God for creating animals,which can be eaten for food.This ceremony will take place at every farm and family compound.This ritual is dedicated to Sang Hyang Rare Anggon,master of all cattle and livestock.
Tumpek Kandang,also pronounced as Tumpek Andang,falls every Saturday of Uye,which occurs every 210 days in Balinese Calendar System.The name Tumpek Knadang is derived from two words-Tumpek means Saturday and Kandang refers to the balinse word for domesticated animal that Balinese highly honor.Those include cows,pigs,Chicken,duck,dogs,and birds.

On this special day,farm animals in Bali also get very special attention;the cows are washed in the river and dressed-up like human beings,with special cone-shaped coconut leaves placed on their horns.The pigs are decorated,with their bellies wrapped white or yellow cloth.The farm animals are fed with delicious food.
This ritual is certainly not an animal worship ritual,The Bainese consider these animals as friend of life and fellow brother created by Gods as liveng creatures.Human life is much assisted by animal,especially in satisfying the needs for food,labor force,religious ceremonies and for in come.For the sake of preservation and prosperity of such animals,the Balinese plead to the gods for the animals well being
Posted by Gede Bali Driver at 4:02 PM No comments:


Air Panas
Kab.Buleleng
In Banjar village, there is a famous site of the so-called Air Panas. It is a sacred hot spring.

Candi Dasa
Kab.Karangasem
The other tourist paradise is located just 2-hour drive from the central beach adventures in Kuta.

Goa Gajah
Kab.Gianyar
The eleventh century cave built on the hillside is one major tourist attraction close to Ubud-Gianyar road.

Goa Lawah
Kab.Klungkung
the bat cave temple, about 7 km of Padai Bai, is one major tourist attraction. It is one of the state temples of Klungkung.

Kamasan
Kab.Klungkung
situated on the south of Klungkung, a tiny village of Kamasan is fully packed with artists' homes and studios. The village is home to traditional Balinese paintings. It is particularly famous as the center of classical wayang paintings that somehow leads back to similar figures of puppets in ancient Java.

Kintamani
Kab.Bangli
One of Bali's most famous village, Kintamani, is located on the scenic regency of Bangli.
The fresh air from the mountain combined with dizzy view is best enjoyed by cycling around the village or trekking.

Menjangan Island
Kab.Jembrana
Besides as part of the National Park in Jembrana regency, it is the home to the unbearable phenomenon of untainted coral reefs that sweep the underwater view in just 100 m-150m off the shore.

Mount Agung
Kab.Karangasem
The towering Mount Agung is the natural decoration that beautifies the eastern regency of Karangasem.

Nusa Penida
Kab.Klungkung
Ater boating for about 40 m off the Bali Island to the far south, the divers will find their underwater paradise around Nusa Penida Island. The visibility is good within 25m-40m dive.

Pelaga Village
Kota.Denpasar
About 800 meters above the sea level and 45 KM off Denpasar at the northern most point of Badung Regency, Pelaga offers you a green and cool sight. An agrotourism walk around the coffee plantation will be the memorable moment and refreshing, too.

Perkebunan Kopi
Kab.Bangli
To differ from the most attractions in Bali the tourists would like to see, the Bali government develops agro tourism which introduces a tour to plantation areas.

Sangeh
Kota.Denpasar
A number of temples in Bali are well known for being the residences of monkey population. Name one is the monkey forest in Sangeh Village, 21 KM away from Denpasar. The resident monkeys are told to be the guardians of Pura Bukit Sari.

Tegalalang
Kab.Gianyar
About 7 km north of Ubud, Tegalalang village sets itself as the center of painted woodcarvings.

Tejakula
Kab.Buleleng
From Air Sanih, one may continue to visit the east of Buleleng where a small village of Tejakula is located. A series of attractions await the tourists, such as the horse bath, a white stone confection of arches and pillars which is not longer used for the original purpose.

Tenganan
Kab.Karangasem
Tenganan village, an inclusive part of Manggis sub district of Karangasem regency, is located between the hill which lies at west and east part.

Ubud
Kab.Gianyar
About 30 Km off Denpasar and amidst the emerald green ricefields in the stunnning central balinese foothills, Ubud village used to be the center for medicinal sources. In 1920s and 30s, along with the coming of foreign artists, it was booming into a Bali;s prominent art center where greatest artworks were created through the fine brush of talented artists.

West Bali National Park
Kab.Buleleng
from adventure to ecotourism, Buleleng has them all. The national park collects the wild west mysteries of nature where the long-extinct Balinese tiger or rare white Balinese starling makes the park their home.
Posted by Gede Bali Driver at 7:42 PM No comments: