“Nice Bali - 5D4N” 4 of 5 starsReviewed February 22, 2015 NEW This was the first time to Bali for me and my family of 7 with small kid, grandma and few teens. I came across Mr Gede's blog and some recommendation from other tourists with google search. I engaged him for the whole trip while in Bali. He is punctual and even help to plan our Itinerary. I just take his... More
Posted by Gede Bali Driver at 6:05 PM No comments:

The Day of Absolute Silence It's really you want to enjoy your slinet day,please visit Bali,this is year fall on March 21st. Nyepi is a very special day to the Balinese as this is the day that they have to fool all evil spirits that no one is actually on Bali - hence the need for silence. If this can be achieved, then it is believed that the evil spirits will go looking elsewhere for their prey and leave Bali island alone for another year. Balinese people are very religious and life is full of ritual - Nyepi is one of the most important days in their calendar. Police and security are on hand to make sure that everyone abides by this rule. Nyepi also serves to remind the Balinese of the need for tolerance and understanding in their everyday life. In fact, Hinduism on Bali is unique because it is woven into and around the original Balinese animistic religion. The two now have become one for the Balinese - a true sign of tolerance and acceptance. As a day reserved for self-reflection anything that may interfere with that purpose is strictly prohibited. Nyepi mandates a day of absolute quiet, based on the four precepts of Catur Brata: • Amati Geni: Prohibiting the lighting of fires, the use of lighting or satisfying pleasurable human appetites. • Amati Karya: Prohibiting all forms of physical work other than those dedicated to spiritual cleansing and renewal. • Amati Lelungan: Prohibiting movement or travel; requiring people to stay within their homes. • Amati Lelangunan: Prohibiting all forms of entertainment, recreations or general merrymaking.
Posted by Gede Bali Driver at 2:52 PM No comments: 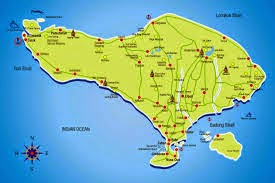 The island of Bali lies 3.2 km (2 mi) east of Java, and is approximately 8 degrees south of the equator. Bali and Java are separated by the Bali Strait. East to west, the island is approximately 153 km (95 mi) wide and spans approximately 112 km (69 mi) north to south; administratively it covers 5,780 km2, or 5,577 km2 without Nusa Penida District,[23] its population density is roughly 750 people/km2. Bali's central mountains include several peaks over 3,000 metres in elevation. The highest is Mount Agung (3,031 m), known as the "mother mountain" which is an active volcano. Mountains range from centre to the eastern side, with Mount Agung the easternmost peak. Bali's volcanic nature has contributed to its exceptional fertility and its tall mountain ranges provide the high rainfall that supports the highly productive agriculture sector. South of the mountains is a broad, steadily descending area where most of Bali's large rice crop is grown. The northern side of the mountains slopes more steeply to the sea and is the main coffee producing area of the island, along with rice, vegetables and cattle. The longest river, Ayung River, flows approximately 75 km. The island is surrounded by coral reefs. Beaches in the south tend to have white sand while those in the north and west have black sand. Bali has no major waterways, although the Ho River is navigable by small sampan boats. Black sand beaches between Pasut and Klatingdukuh are being developed for tourism, but apart from the seaside temple of Tanah Lot, they are not yet used for significant tourism. The largest city is the provincial capital, Denpasar, near the southern coast. Its population is around 491,500 (2002). Bali's second-largest city is the old colonial capital, Singaraja, which is located on the north coast and is home to around 100,000 people. Other important cities include the beach resort, Kuta, which is practically part of Denpasar's urban area, and Ubud, situated at the north of Denpasar, is the island's cultural centre. Three decades ago, the Balinese economy was largely agriculture-based in terms of both output and employment. Tourism is now the largest single industry in terms of income, and as a result, Bali is one of Indonesia's wealthiest regions. In 2003, around 80% of Bali's economy was tourism related. By end of June 2011, non-performing loan of all banks in Bali were 2.23%, lower than the average of Indonesian banking industry non-performing loan (about 5%). The economy, however, suffered significantly as a result of the terrorist bombings 2002 and 2005. The tourism industry has since recovered from these events.
Posted by Gede Bali Driver at 3:33 PM No comments: