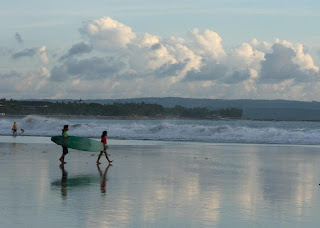 Since the 18th century Kuta has served as the entry for foreigners visiting southern Bali. In the1830s Kuta was the a thriving slave market, attracting a wide variety of international ‘lowlifes’. Since its rediscovery by hippies and surfers in the 1960s, Kuta and Legian have expanded so rapidly that the district is now one of the busiest tourist areas in the world. At three hundred year ago, in this place had been built a Konco (Buddhist Temple) located beside of Tukad Mati (Dead River) where it river can be navigable at that time. The boat steps into the hinterland of Kuta, so that Kuta is a port trade. Mad Lange is a merchant from Denmark in 19 century had built its trade station in the river periphery. During living in Bali, he often becomes the medium between king of Bali and Dutch. Mad Lange has mysteriously died and his grave is located inside of Konco (Buddhist Temple) right in the river periphery. Kuta is quiet fisherman countryside in the past, but now is has been turned into the hilarious town and it is completed by post office, police office, market, pharmacy, photo center, and shop. There are a lot of hotels which are designed luxury and comfortable set in a long side of white sandy beach of Kuta.
Posted by Gede Bali Driver at 4:34 PM