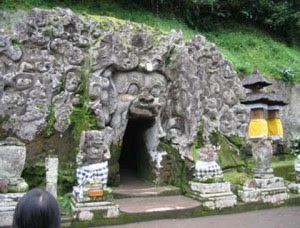 The name Goa Gajah ( Elephant Cave ) was probably derived from a name mentioned in a scripture called Negara Kertagama written during the reign of His Majesty King Hayam Wuruk of Majapahit kindom .In this scripture is mentioned that the king had a heritage on the slope of a mountain called “ Lwa Gajah “.Other assumption come from the shape of the cave which entrance is decorated with carving to look like monster,and from a distance look like elephant head.Another said that the name is come after a Ganesha wooden statue which is put in the cave .Ganesha is a mythological son of shiva,with human body and elephant head.First excavation was conducted in 1950 based on the surface findings and the scriputures.Before it was excavated the area was totally buried and no indication of the bathing place and the cave.The axcavation by National Archaeological Service was successful and could disclose a monument heritage. It seems that Goa Gajah is a hermitage place for the Buddhist priest or what is later known as Shiva-Buddha Syncretism,since there is remains of Buddhism and Shivaism such Lingga- Yoni symbol,and the Hariti Fertile Mother.It was also probable that the oldest Buddhism remains is here,as a Buddhist statue just 25 meters north of the cave as found bearing the same style those found Borodudur.On the wall of the cave was written Sanskrit word with a type of old writing called “ Kadiri Quadrate” mentioning” Sahivansa” It is not known what is the meaning exactly.The writing style was developed during the flourish of Singasari kingdom in East Java around 13th century. Goa Gajah (the Elephant Cave ), is located in a steep valley just outside of Ubud near the town of Bedulu . Built at least 700 years ago, the cave was rediscovered in the 1920s and fully excavated 30 years later.
Posted by Gede Bali Driver at 4:20 PM