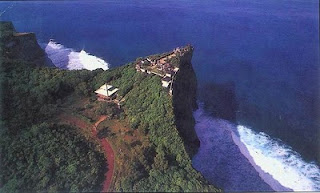 Uluwatu Temple
Bali Travel Information, Bali Temple, Uluwatu Temple is one of Sad Kahyangan in Bali (six big group of Bali Temple ), located in Pecatu Village region, Subdistrict of South Kuta, Badung Regency, about 25 Km southerly part of Denpasar town. The temple located the above coral reef sordid to sea about 80 meters from sea level. When seen from direction way, hence its Uluwatu Temple location located in Southwest from Bali island. In eastside of this temple there is Kekeran Forrest (interdict forest) own the temple which is occupied by a lot of monkey and other animal. Name Uluwatu come from word ulu meaning head or tip of and watu meaning stone. Therefore Uluwatu Temple mean the temple built in tip of coral reef.
Uluwatu Temple in Story
In the right and left of building or pelinggih Ida Bagus Ratu Jurit in complex of Uluwatu Temple, there are two stone mangers it's for looking like a boat. When both of it united hence it's for similar to sarcophagus, that is stone case result of megalithic era culture. Here there is archaeology omission coming from 16 century that is arch or winged entrance gate. Winged entrance gate represent the scarce archaeology omission. Winged entrance gate Uluwatu Temple (a period of its making) can be compared with the same one located in mosque complex in Sendangduwur Village, Lamongan, East Java, where the period of its making is relevant with the year candrasengkala found at this inscription. Candrasengkala found in the mosque is written with the wording gunaning salira tirta hayu meaning year 1483 Saka or 1561 Masehi.

In papyrus of Usana Bali mentioned that Mpu Kuturan (Saint teaching Hinduism in Bali) a lot of built the temple in Bali for example Uluwatu Temple. In papyrus Dwijendra Tatwa elaborated by that Mpu Kuturan twice pay a visit to this temple:

* The first visit when he conducts the Tirtha Yatra that is journey visit the holy places. At arrival in Uluwatu his heart jolted, heard a soul whisper that place good to worshiping God. When it is the time for, he chose this place as a place for ngeluwur ree of soul /dead leave without body to return to origin (moksa). Pursuant to the consideration then he set mind to build the Parhayangan or extend the building of Uluwatu Temple which there have previously. When Mpu Kuturan extend the building of Uluwatu Temple, he build hostel as residence and then the ex- the hostel built temple by local society named the Gong Hill Temple (Pura Bukit Gong). The building of Parhyangan in Uluwatu Temple is done by Mpu Kuturan in the early 16 century after he lifted to become the Purohita (priest of king adviser) from king of Dalem Waturenggong commander in the year 1460-1552 .
* Second visit done when Mpu Kuturan will reach the nature Moksa. OnTuesday of Kliwon Medangsya (Balinese Calendar) witnessed by a fisherman, his name Ki Pasek Nambangan, he looked to be like flash only in the form of very very bright light step into the space called ngeluwur.

Implicit at papyrus Padma Bhuwana that Uluwatu Temple which lay in direction of Southwest functioning to worship the Rudra God, one of the god in nine god which called Dewata Nawa Sanga. Rudra God represent to exist the Deity Siwa as Pemralina or return to provenance. In this papyrus also mention that Gate Uluwatu represent the Kahyangan World worshiped by entire/all Hindu people. Nowadays this temple are visited by many people from all over the world because it has beautiful panorama in partucular at the sunset time make the people wish to return so that Uluwatu is one of Bali Tourism Destination.
Posted by Gede Bali Driver at 4:30 PM