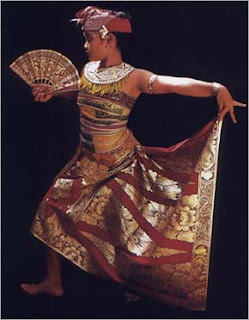 
When the first Western settlers found Bali, they were awed by the unique, mystical art forms and music in this island oasis such as Kecak dancing and gamelan music. On the island, Balinese consider art to be a natural activity, as most performers are peasants who work in the fields during the day and perform during the night. Dynamic and agile, Balinese dance is dramatic, each dance with a different story, performed often by candlelit at the foot of a crumbling, magnificent temple. Dance is a part of life and often times the whole village will partake in the performance as these dances are performed according to strict tradition. Many of the dances tell stories involving the Ramayana epic, battling the ubiquitous themes of love, death and war. The Barong dance is accompanied by Gong Kebyar - an orchestra formed by a group of gamelan instruments and various metal gongs and symbols. The Barong dance is the classic story of good, the lion-like Barong conquering over evil, a witch Rangda .


The Kecak dance is one of the most famous, aesthetically impressive dances in Bali, although it is not a traditional dance. Created in the 1930s, this dance is not accompanied by traditional music. Instead, the dance group is accompanied by a large crowd of young shirtless men, with flowers in their hair who recite “kechak-ke-chack” over and over at various rhythms throughout the dance.

The crisply percussive gamelan music which accompanies most Balinese dances shares their vitality and agility. The Gamelan are musical instruments with five notes forged from copper and bronze. Each village that can afford it has their own gamelan orchestra. On any night in Bali, tourists can amble around a village, find a quiet porch for a soothing drink and listen to the sound of the gamelan orchestra radiating from the village " banjar " (meeting place) in the background.
Posted by Bali Driver at 6:26 AM 0 comments
Wednesday, August 13, 2008
Bali Architecture

Balinese architecture is not only aesthetically impressive with wood carvings, majestic stone gates and ornate Indian influence engravings, Balinese architecture also has strong spiritual symbolism. Many temples, rice barns and other structures are built according to traditional Balinese rules, called Asta Kosala Kosali, which traditionally were written down in lontar palm books and interpreted by traditional architects called Undagi. This leads to very distinctive designs and architectural congruence throughout Bali’s villages, which all delicately interwoven with the natural surroundings.

In Balinese building, one of the most common features is the Bale, which is an open pavilion with a thatched roof and no walls. The Bale represents the Hindu-Balinese universe. The roof is the 'gods' section, the body is the 'human' section, and the base is the 'demons' section

Other impressively symbolic architectural sites in Bali are its palaces. Since in classical 19th century Bali, the Balinese believes their king was divine, his residence was the puri - a replica of the cosmos and thus a sacred symbol. Balinese palaces are always square, walled, and courts within courts.

In Bali, all buildings have to be brought to life and ceremonially purified in a ceremony called Melaspas before they can be lived in. It is important that all materials – such as the wood, stone and thatch, which have been cut down and killed for the construction, are, as it were, re-incarnated. During this ceremony, many offerings and gifts are made, including animal sacrifices.
Posted by Gede Bali Driver at 5:25 AM